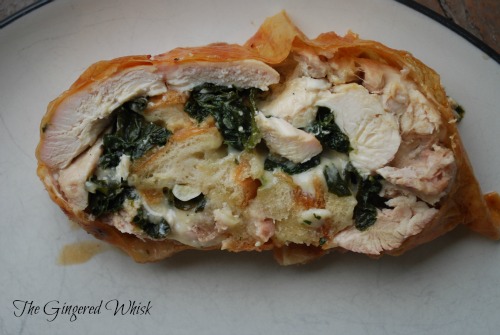 Ready for a super challenge? Come on, I know you can do it!
If you ready to roll your sleeves up, chanel Jacques Pepin, and take on something technically challenging but so deliciously worth it, than I have an amazing recipe for you today!

I would suggest wrapping your laptop in saran wrap and placing it on your kitchen counter while you make this. You will want to watch this video about 50 bajillion times while you prepare this. This way you can stop/rewind/play as much as you need without getting raw chicken all over everything. http://www.youtube.com/watch?v=kAekQ5fzfGM

Once you get through the de-boning part, the stuffing, stuffing, wrapping and roasting portion are fairly straightforward, and afterward - WOW. I was kind of hoping this would be an ultimate flop so I would never have to do it again. But that is not the case here at all. This is delicious. Amazingly delicious. Very moist, and sooo delicious! I'm definitely going to be mangling more chickens!

Love cooking traditional meals that will stretch your cooking techniques? Try these dinners:

1. Heat the oil in a large saucepan or skillet. Add the garlic, spinach, salt, and pepper and cook for 1 minute to soften the garlic and wilt the spinach.
2. Transfer to a bowl and let cool to room temperature. (The mozzarella and bread come into play when you are stuffing the chicken, so just prepare them and set aside for now.

(watch this video to see Jacque Pepin de-bone a chicken You-Tube
after you have boned it out):
1 Preheat the oven to moderately hot 400°F/200°C/gas mark 6.
2 Lay the chicken skin side down on the work surface and sprinkle with the salt and pepper. Spread the cool rice or spinach mixture evenly over the chicken - stuffing the legs too. Sprinkle the cheese and bread cubes on top of the spinach. Roll the chicken up, tie it with kitchen string, and place it in a roasting pan.
3 Roast the ballotine for about 1 hour or until the temperature is 160-165 degrees F in the center of the ballotine. I took mine out after 50 minutes and let it sit until it reached 165. Lift it from the pan and place it on a platter.

4 Skim off and discard most of the fat from the drippings in the pan. Add the water and wine to the drippings to deglaze the pan, and heat over medium heat, stirring to loosen and melt the solidified juices.
5 Strain the juices into a saucepan. Add the celery, onion, and carrot and bring to a boil over high heat. Cover, reduce the heat to low, and boil gently for 5 minutes. Stir in the dissolved potato starch and soy sauce and bring the mixture back to a boil, stirring, to thicken it. Remove from the heat.
6 Transfer the ballotine to a cutting board and remove the string. Cut half of it into 4 or 5 slices, each about 1 inch thick. Return the uncut half of the ballotine to the serving platter and arrange the cut slices in front of it. Pour the sauce over and around the ballotine, garnish with the parsley, and serve. Cut additional slices of ballotine as needed at the table.
Powered by Recipage

Jenni lives in Des Moines, Iowa with her amazing husband, three girls, three dogs who think they are children, and two feisty cats. She is the creator of The Gingered Whisk, a recipe blog dedicated to finding easy, healthy-ish, and tasty weeknight meals that kids and adults alike will love. She is super passionate about helping every member of a family learn to love great food. When not cooking, eating, or thinking about food, she is often hiking around area parks, creating intricate legos castles with her girls, watching nerdy tv with her husband, or curled up in a corner somewhere reading a good book.

Be sure to check out the recipe index where you can browse recipes by meal type and category!

Check Out the Recipe Index

My name is Jenni, and I'm an Iowa mama of three. I am passionate about raising kids who are adventurous eaters through quick and healthy weeknight meals inspired by global cuisine!